Read the original article by our partner Dorabaltea

The structure and the environmental context:

In Aquila, there is the Militia of the Madonna del Rosario which performs every first Sunday in July. The Aquila militia was born in the nineteenth-century context of the constitution of the Republic, in which many Swiss troops were sent to war by Napoleon on the battlefields of Italy, Spain, and Russia.

The festival traditionally refers to a sign of gratitude towards the Madonna for having spared many Bleniesi soldiers during the retreat on the Beresina river from the Russian Campaign. Even today the Napoleonic Militia is an integral part of the L'Aquila reality.

Analysis of the intervention and installation scheme:

The ECOROCK wastewater treatment plant was installed at the service of a newly built two-family house and was built by the Giuliani company.

The construction site did not present particular executive difficulties, but the ease of installation and the lack of need for electrical connections of the purification system made it particularly easy to install. The semi-detached house, built in the traditional way, is located at about 800 meters above sea level, so the technology chosen has also taken into account the low temperatures reached in the winter months. The complete burial has favored an almost zero visual impact.

Pictures taken on the construction site: 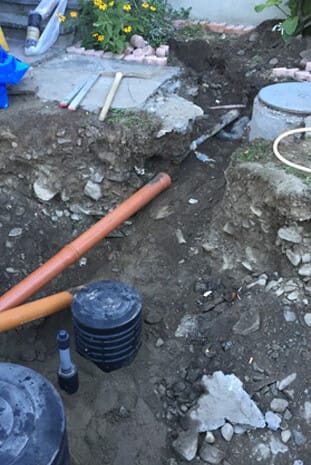